At CES I acquired the sinking feeling that my problems sharing data between my PCs and River's Mac can be attributed to poor standards support by the Apple AirPort that links the Mac to the rest of my network. I haven't proven it yet, but here's a story that lends fuel to the fire, at least by implication.
Posted by Scott Mace at 9:12 AM No comments:

mobile Funambol's mobile calendar sync service is now free for life. I don't use Funambol, but if you do, check this out.
Posted by Scott Mace at 1:35 PM No comments:

I walked around the Consumer Electronics Show (CES) halls today and found many, many booths talking about how much families can share using consumer electronics. Photos, videos, music, documents...the list goes on and on. And then it stops. It never includes schedules. 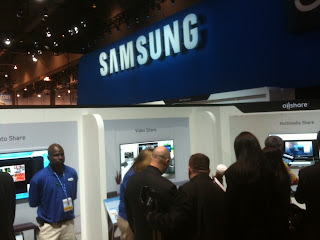 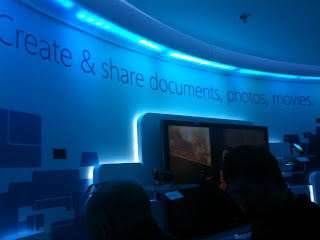 I could also post similar big banners found at the TV and mobile phone manufacturers' booths, but you get the idea.
Only Casio talked about sharing schedules, but basically it was vaporware to help promote a low-energy reboot of Bluetooth radio technology (including the return of the smart watch!): 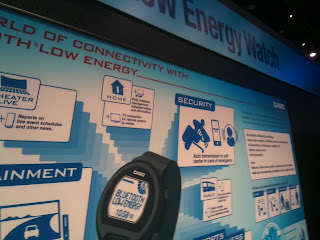 To further epitomize the pathetic progress being made on calendar sharing, the Consumer Electronics Association, which puts on the CES show, added its own calendar to the FollowMe MyCES iPhone app, but if you want to sync anything you selected or scheduled in that iPhone to your iPhone's own calendar, you had to individually select each event one at a time rather than having a way to sync all selected events at once. Arrgh!
Once again, the consumer electronics industry ignores calendar sharing, and arguably, with the withdrawal of Microsoft's Home Server last year, has taken a step backward. Perhaps only a massive data breach of Google, exposing the personal appointments of millions of people, could wake people up.
Meanwhile, the Microsoft Windows 7 booth focuses on this "gallery" of form factors rather than focusing on helping people simplify their schedules or anything less abstract: 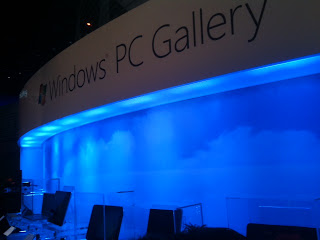 (Standard disclaimer: Yes, go ahead and use Google Calendar, Microsoft Live or Apple MobileMe to share schedules. If others who you want to share schedules with don't have problems with that. A lot of people do.)
(Second standard disclaimer: Yes, home consumer electronics represent a single point of failure. But there are ways to back up critical data securely to the cloud without resorting to Google, or even to just securely back up data to some of your other devices.)

Posted by Scott Mace at 4:42 PM No comments:

This work is licensed under a Creative Commons Attribution-Share Alike 3.0 United States License.